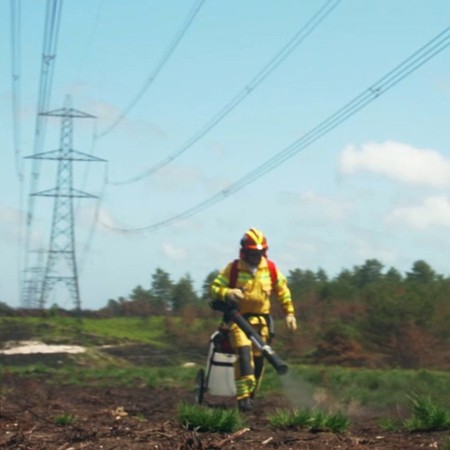 Arcus Fire are a manufacturer of specialist fire fighting equipment, both from the ground and the air. They got in touch with us to promote to their new product, the Fire Caddy – for use combating forest fire from the ground, right at the source… for as long as possible! 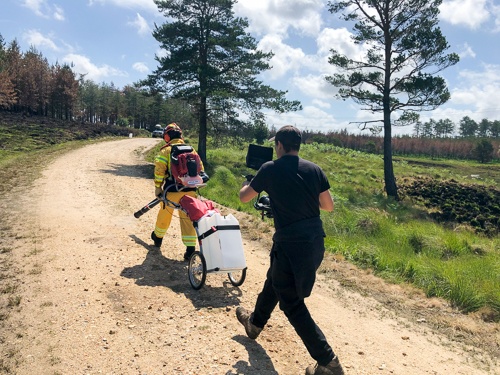 The revolutionary idea of the product is to provide that front line, sustained wild-fire suppression capability to ground crews, on foot. The Fire Caddy is a tool for a two man team, without the need for a support vehicle. It enables access to the harder to reach terrain, and produces a fine water spray to suffocate the fire. The use of a spray or blower to do so was an existing technology, in fact a high velocity leaf blower alone (as I understand it at speeds of over 200mph) can begin to suffocate a fire. You add a water or mist spray to that and the suppression capability goes right up, the only drawback being the fireman is now carrying a motor and also a water tank on his back. Potentially destabilising stuff, and most certainly cumbersome. 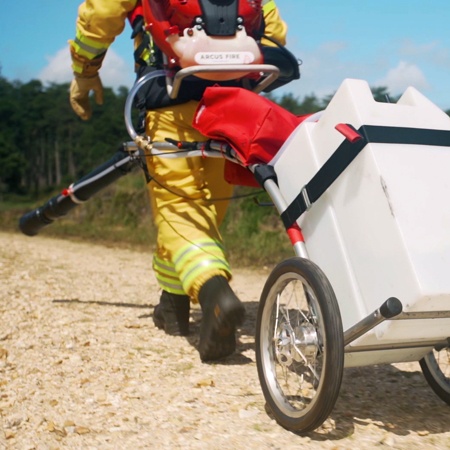 The Fire Caddy added the ‘caddy’ or tank, pulled behind the fire-fighter on the ground, stabilised by a buddy, and only supported at intervals by a vehicle carrying further replacement 25L tanks. The unit gives operating durations of up to an hour, the impressive wall of stat’s include things like delivery of 1000 cubic feet per minute of air, using under 1L of water as mist per minute. In fact there are quite a few, and it’s probably most easily digested in the form of a video:

We started by taking the time to understand the company, the product and its position in the market – which is to professional (usually government body) fire-fighting units, and on an international scale. Arcus Fire themselves are a high end manufacturer with a range of products of all shapes and sizes, and needed something to show the quality, effectiveness and workmanship of  what they were offering. The Fire Caddy was I believe revolutionary, with what we felt were a host of unique qualities and a massive market potential. But most of all it was providing something really useful for professionals in a very tough line of work, and adding to the safety of the community, wildlife and their habitat.

Arcus Fire knew their market well, and already understood that on-screen text, demonstrations and stat’s would stand the best chance of finding a chink in the tough, battle-hardened hide of the purse strings of the fire-fighting professional. So no voice-over, no interview. Just the product speaking for itself. For this situation it’s a good way to do, and to be honest the cheapest. Easy to film, and easy to edit – if, and only if, you get the ground-work right…

The next stage was to draft a script detailing everything as we understood it in the most logical, concise and impactful way. We then needed to go through a couple of permutations with the client to ensure the industry wording was correct, the facts were the most pertinent, and all bases were covered. This is probably the most time-consuming stage, and is certainly the most important. As I say, it is the foundation on which the project is built. You have one day to shoot the film, and budget is always a prime consideration so edit time is minimal and relies on a water-tight, most importantly correct script. There is no chance to go back for another day and pick-up more shots of the unit at work, and the last thing anyone wants is to arrive at the final version of the script only through trial and error, revising the film 15 times! 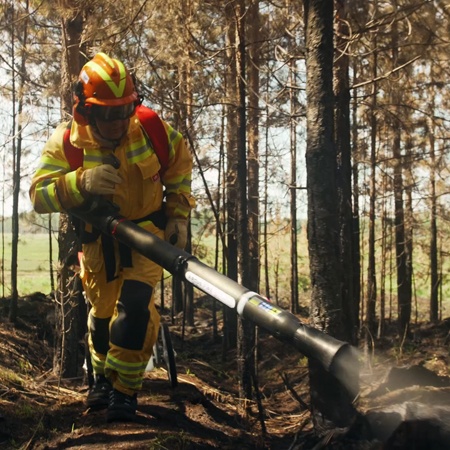 We actually shot the film (in one day) in Wareham Forest, over the border from us in Hampshire, in Dorset. They had just undergone a period of intense bush-fires, which had taken some putting out, but which worked perfectly for our shots and which the guys at Arcus took advantage of by actually demo’ing the unit to the Forestry Commission on on that day. 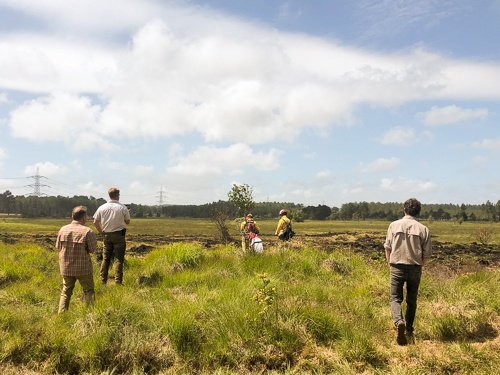 Demo’ing the kit to Forestry England

We wanted to concentrate on demonstrating the diverse terrains which the unit could endure, and thus its access capabilities, so we filmed a sequence of three shots matching the position of the fire-fighter and unit in each (walking left to right) to quickly ‘match-cut’ between them and show that range. 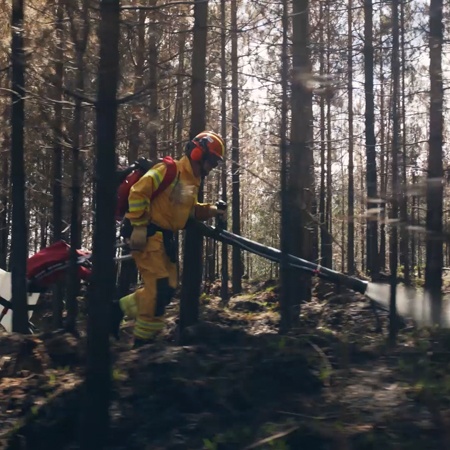 Then we wanted to show the power of the blower and the fine mist, and employed some slow motion footage to do so on gravel and also vegetation, all shot on the stabilised gimbal.

Shooting telephoto on a gimbal is not an option, but by shooting in 4k and cropping in post production we could get close to that spray / mist – without ruining the camera equipment. 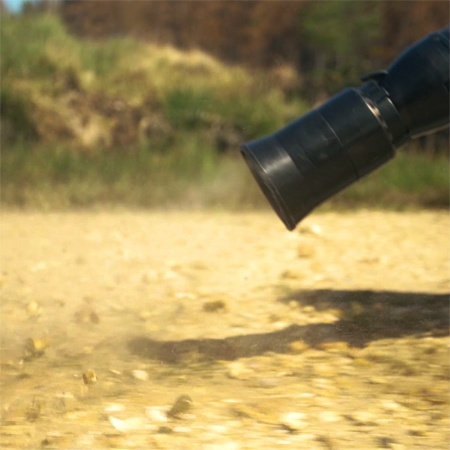 We also took a couple of go-pro shots directly from the front, to help us all encounter the full force of the Fire Caddy. 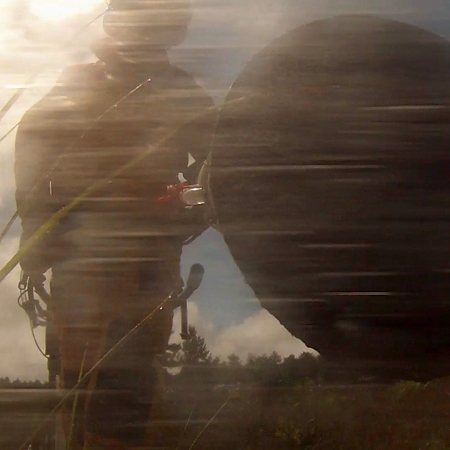 Another option that there wasn’t was lighting more fires and putting them out. But that is such an integral part of what the Fire Caddy could do. The solution was to use relatively inexpensive archive footage of relevant forest fires, cut them together with our spraying and blowing shots, and the art of the edit =  the impression of fire being extinguished. It’s like filming someone being shot with a gun cheaply and less-dangerously – shot 1 sees the gun fire, shot 2 we see the person fall… our brain joins the dots of action and reaction, without ever having to fire a gun at someone. Or light an unwanted fire.

Then we needed to get some nice b-roll or GVs of the unit in a rustic situation, so we could talk about and highlight specific parts of it, so for that one point of the day we pulled out the tripod, and panned, tilted and focused away. 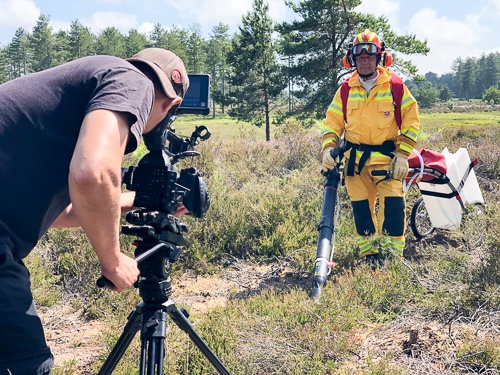 As the shoot was outside we didn’t have to go full COVID with masks, but did of course have to remain socially distanced and maintain proper respect and caution for any chance of infection, with all equipment wiped down beforehand and proper hand sanitisation on location. No radio mics, only the boom or a camera mounted shotgun. Easily done safely.

Finally, and last but not least, came the marketing via social media. The main film was carefully targeted at those in a position to buy the product on a significant enough scale, but we needed some good social media content to raise some brand awareness, tease the main and direct people to the website. For this aspect we isolated four selling points of the product, and highlighted each in its individual short film, also producing square aspect ratio versions for Instagram.