Following on from my previous blog about the optimum social media video lengths, here are some stat’s to further inform your choices and shed a little more light on the subject.

I was just going to list out the most relevant stat’s but they’re a bit misleading on their own, and some seem to contradict others.

Anyway, after some extensive market research… presenting 8 great marketing statistics on the effect of video length:

I like this as it nicely illustrates the trend (admittedly not technically ‘news’) towards shorter and shorter films to cater for shorter and shorter attention spans. Now the large scale video surveys that provide these statistics simply aren’t done that frequently, but in light of this first gem we should basically scale their results up or down as appropriate to today’s world.

2. According to LinkedIn tips, most successful video ads are less than 15 seconds long.

Admittedly limited on hard facts – how much more successful? What percentage is ‘most’? But we get the idea – when advertising on LinkedIn the shortest ads are the sweetest.

3. A LinkedIn internal study (2018) showed that videos under 30 seconds had a 200% increase in view completion rates.

Nicely supporting stat #1 – that 15 (or even 30) second LinkedIn ads are most effective – but crucially what we learn is that these shorter videos are also more likely to get people to watch the whole thing. On that point, with longer films make your point right up the start, front load the good content as many people simply will not watch to the end.

We can back this up with the Vidyard stat that: 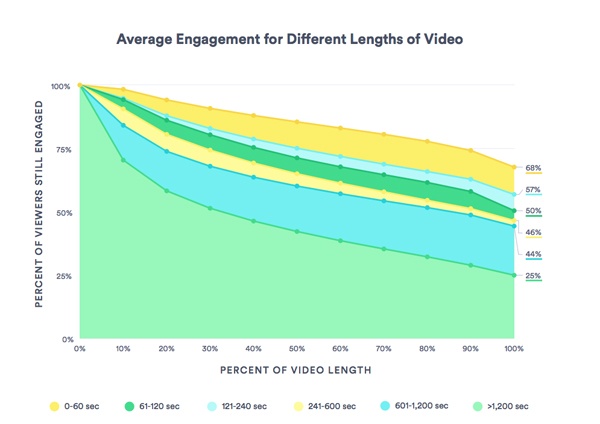 To put that in a bit more context, this also shows that 50% of people will watch a full video if it’s 2-4 minutes. So duration helps, but it’s not like it drops off a cliff. And the better edited and more compelling your content, the higher your chances of retaining the viewer.

This survey was done in 2016, and we could argue that their 2 minute mark had become 1 minute by the 2018 Vidyard survey. What is slightly contradictory is that they saw an initial 70% engagement (which I assume means watching the entire thing) remaining consistent to around 2 minutes, after which it dropped off to around 50% by 7 minutes and levelled out. 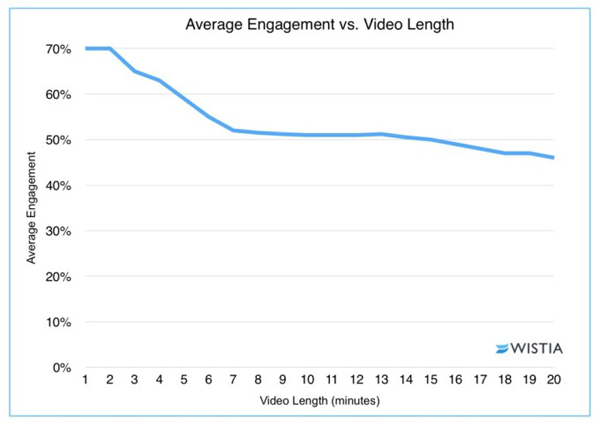 But again it shows the falloff is not an all or nothing. And it’s notable that we are seeing the same figures in both surveys – of 70% engagement for shorter pieces falling to around 50% as length increases.

6. Vidyard also claim that 73% of Videos Are Two Minutes or Less in Length.

Which certainly sounds like a wise policy considering the above points. There is another stat that the average length of video is a little over 4 mins, which I feel a little misleading as it’s no doubt been inflated by a small percentage of inordinately long videos (stat attack: 2% are 10 to 20 minutes long).

An even more alarming version of what we have heard already! Either could be right, but bear in mind this stat is amazingly from 2010. Like Vidyard (which is not quite presented in this way) it claims that the fall-off is roughy linear – so the longer a film is viewed the more people will bail (and continue to bail, past that 50% mark). Makes sense, though the difference seems to be that Wistia is concerned with the total film duration as an effect whilst here it is simply viewing time (irrespective of total film length). But there is no safe initial 1.5 minutes as the Wistia results would have us believe. I’d guess these Ad Age figures are simply spookily ahead of their time, and may in fact give a fair estimation of what happens today. 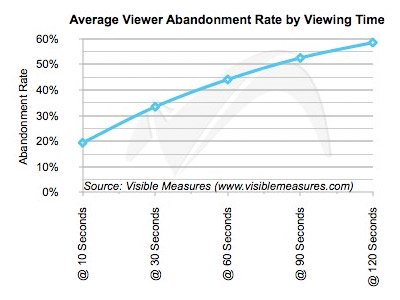 8. Facebook findings  (in 2016) show 65 percent of people who watch the first 3 seconds of a Facebook video will watch for at least 10 seconds, while only 45 percent will watch for 30 seconds.

So this is specific to Facebook, where video is simply going to have to be shorter than on the web, which the other surveys refer to (or YouTube, specifically). But this just goes to underline the 2010 Ad Age findings. The presentation of the numbers here is reversed (detailing those abandoning instead of those remaining) but the equivalent curve is going to be about the same, just at a higher level of ‘abandonment’.

Maybe worthy of it’s own entry, but in 2020 Richard van der Blom of Just Connecting, in conjunction with the Open University, found the following specifically for LinkedIn: engagement from 30-60 seconds was 100%, down to 80% between 1-3 minutes, 55% between 3-6 minutes, and then 25% between 7-10 minutes. These numbers are not as brutal as Facebook. Like Wistia they assume an initial plateau before falloff (though 100% seems a bit surprising) after which the decline is about twice as steep. So if you’re on LinkedIn – deliver content of 1 minute or minute and a half maximum.

There we have it, it’s official. You have but a handful of seconds (15 – 30 max) before people tire of your content and move on to better things! But it doesn’t mean everything needs to be so short. Ad’s and promos, yes, especially if delivered as a paid placement in someone’s social media feed. But if it’s on your own, or especially on your own website then push the duration numbers up. For example, if it’s an explainer video on your website then the viewer has arrived there under their own steam, is motivated to be there, and in my opinion will stay considerably longer – which may be reflected in the Wistia survey results, where we see a 2 minutes of engagement before any fall off.

Unlike this article, where only 20% of people will ever read to the end.

If you have any questions or feedback, or if there’s anything you feel I have missed or would be useful to add to the list, do let me know in the comments.
If you want to get in touch for a quote for video production, feel free to get in touch.