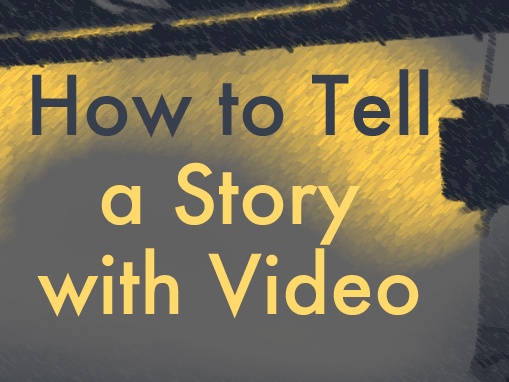 Something I find I am explaining as much as anything to potential customers is this very concept, ‘how to tell a story with video’? How can we deliver your information? What are the options, what feel does each give to the film, which is most suitable, and how do they affect budget?

If content is king… context is very important too

For video, just as much as it is for the written word, content is king. The difference is that in the video production industry we have more than one way of delivering it, the context.

The goal of every one of our videos is for your story, what you choose to talk about, to hook, engage and retain each viewer for as long as possible.

The content makes each film unique, but how you say it counts for a very great deal, and will change depending on the project. So in this post I am going to give you the simple options for how to tell a story with video, and to explain in which circumstances we would recommend each technique.

Essentially, there are three major methods which we can use to deliver information:

This conveys your message purely visually, the text on screen could tell a story, or it could deliver information.

This promo piece for Jackloc window restrictors tells the story using only text, and so can easily be used on social media where user streams are frequently muted.

Or in the following film for Ride and Seek Bicycle Adventures we started the piece purely visually, not telling a story so much but more inspirational or stirring sentiments, though to be fair natural sound does play a big part:

This the most cost effective way of producing a film. You pay for a day or so’s scripting, and the additional time for text in the edit can be minimal, depending on the level of animation of the text. If we introduce boxes and interesting way of bringing it on and off screen, such as in this info / promo piece we created, then costs go up:

But with using text there are no voice-over costs, and edit time is minimal as all the decisions have already been made and we shoot to fit the script.

It’s suitable when we simply have to introduce a product rather than anyone behind it, and especially relevant if the piece will mostly be seen on a social media feed.

There is a great deal of professionalism to a voice-over piece. Again, it’s useful if you do not need to meet the team members, and it’s the product that needs to be the star. For example TV adverts usually use a voice over, and companies like a bank or phone provider have few options – it’s either this or the text.

Here is an example we produced for the Universal Filling Machine Company using voice-over:


The process involves an initial decision about male or female voice suitability to the brand, then we send the script to a selection of artists for a quote and sometimes sample read. The client (you) can then make an artist decision on this information along with previous pieces of work from each artist on the short-list.

This usually works out around the same cost as an interview driven film, and probably cheaper than a complex piece using many interviews. For voice-over you need to pay for a day’s scripting, and also the fee of the voice-over artist, which will be dependant on the duration of the film /script and on which channels it will be distributed, for example if it’s going on TV or in the cinema rates will be higher. But the edit will be quick, as again as we shoot to the script and so everything should just slot in, and to be fair always does. This so much depends on nailing the voice-over script pre-shoot, and really deserves a recce day to make sure we’re planning and scripting everything absolutely correctly.

Using interviews gives a personal connection with a viewer. It may not always be appropriate, but it’s often that the prospective customer can expect to deal with the featured interviewees and part of our goal is to build trust with them, giving the customer confidence not just in the product but that they will be in good hands.

We can see this for example, in this film we produced for Knots Hairdressing in Deal, where we interviewed the manager along with a client testimonial:

And a useful comparison is with Jackoc, where we also created this alternative film after interviewing a couple of satisfied customers:

These types of films can sometimes be fairly complicated, such as the below for the Kent School games, where a great deal of information is required, using multiple interviews, where it becomes somewhat of a documentary:

Pre-production is down to scripting the interview questions, but generally this method of driving a piece with interview increases the edit time. The more interviewees you use, the harder it is to edit together. It’ll work out at a similar rate to voice-over, or slightly more expensive. What we have to factor in as well is the interview time on the shoot day, which requires time for a comprehensive lighting setup. If there are multiple interviews and locations, then it’s not so comprehensive! More functional.

With a career in TV documentary editing, I intend to offer a service that brings the storytelling, personality and viewer engagement on these types of films to a level above what you’ll find elsewhere. This is really what sets us apart. And moreover, we can do it quickly, especially as being both the editor and on the shoot I have a huge head start on the material.

If you do want to use interviews cheaply, we have worked hard to find a way of making them highly cost effective. If we are careful to talk about certain topics, with interview answers guided within certain time-frames, then simple testimonial films (with no additional footage) can be edited down very quickly and efficiently. This way the shoot is only half a day.

An example is this testimonial for the Forte Kitchen in Winchester, which was interview only, no other vision, using 2 cameras to enable editing the interview down:

So there you have it, the three broad options to deliver the information in your film. We can help you decide which is right for your brand, and for your budget.

If you have any further questions or feedback, or if there’s anything you feel I have missed or would be useful to add, do let me know in the comments.
If you want to get in touch for a quote for video production, feel free to get in touch.