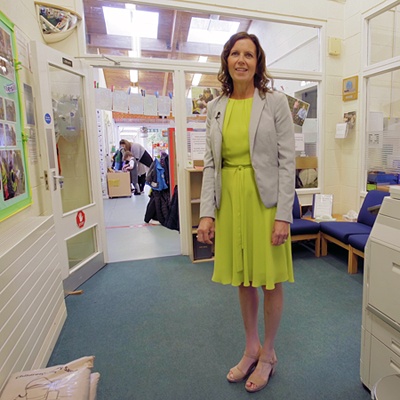 During 2020, COVID restrictions affected schools as much as any workplace or industry. Certainly for our family it made a huge difference – home schooling doesn’t seem quite as romantic as it used to be and there’s a new-found appreciation for the workload and patience of the school teacher. 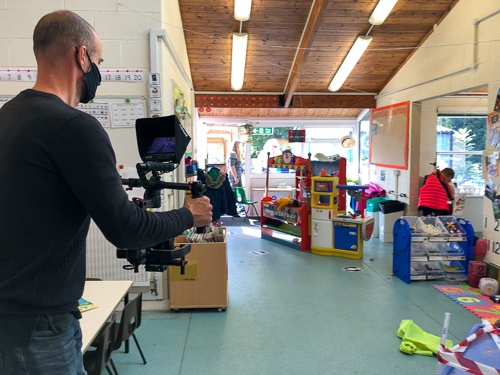 During the non-lockdown periods of 2020 restrictions still meant that the usual school tours for prospective new parents could not take place, so we were keen to get involved and help out our local primary school, Owslebury, near Winchester, to continue to recruit the new year ‘R’s. Owslebury is on one hand blessed with an idyllic rural location, and which on other the hand leads to a smaller community and school size. Year R has in fact never been fully subscribed – and so not even being able to show parents round was a daunting prospect.

We felt it should be fairly easy to at least create a simple tour video. Following the headmistress, Mrs Smith, on her usual route for new parents, using a stabilised camera rig with a radio mic (fed into the gimbal-mounted camera directly). What worked well is this is a presentation in which she is very well versed, so it’s not a daunting prospect, nor is there an issue of forgetting lines or content. 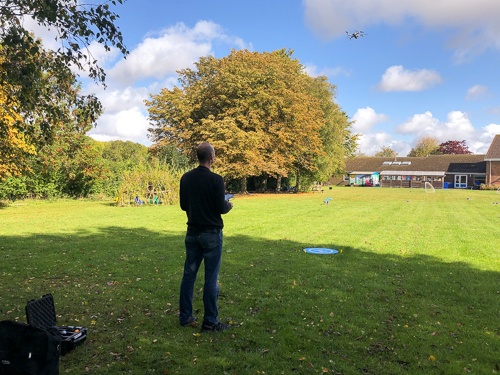 We did need to stop the camera a couple of times, so it wasn’t just the one take. We picked up (re started) parts of scenes as Mrs Smith interacts with pupils, which naturally needed a couple of attempts. But this is ultimately a very simple job in post production. So such a film is both quick to shoot, and very quick to edit. Bookend it with a few drone shots… and it comes out remarkably well, on a small budget.

So we then had the time to, and wanted to come up with a few other small films to endorse the school. Testimonial being the obvious answer to this, and we shot a selection with both parents and children. The parents spoke very well, the kids took more careful handling as most become quite shy of the camera. The younger they are the more so, down to the the poor year R’s who really found it the most difficult. Leaving the camera rolling afterwards, and rolling it before they knew we were filming was our best bet of these yielding any usable content. However, the longer we were there the more wanted to come and play a part, and for me it’s a numbers game with kids. You can’t tell who’s going to deliver on camera, some spritely ones just clam up and others come up with the most wonderful insights and touching little comments. I think there’s a sweet-spot of around 7 or 8 years old where they are confident and articulate enough to interact with new people, but not too self-conscious or inclined to put on a front or to tell you what you want to hear.

One of the hardest things turned out to be release forms. For these projects it is not practical to get a release from each household of each child, the school either has a pre-existing agreement with parents, or they can ask specifically for such a project if there are any objects. What we found was that the pre-existing agreements prohibited social media, as you can imagine no school is inclined to post images of it’s kids on SM nor does it allow anyone else to do so on events such as sports day or a school play. The grey area was hosting a video on Vimeo and embedding it on the school website. Although not to be distributed on Facebook or Twitter etc, Vimeo could be classified as a social media site and the parental agreements needed updating before we could go ahead with the films. 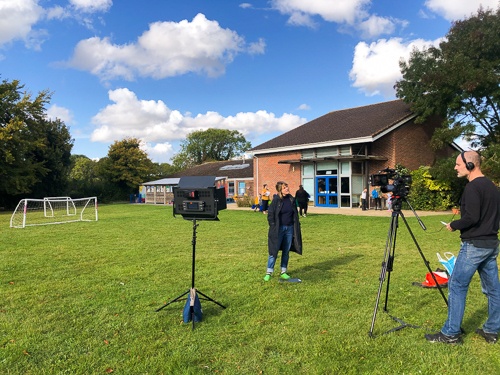 Finally, we wanted to create more of a show-piece film. It took a little more time in the edit, so wasn’t the quick fix of the tour, but was going to offer another level of detail for the school and for prospective parents – seeing the kids close-up at work and play, whilst also hearing from them, and from the teachers and the parents. Owslebury has so many things to offer, with a wonderful, nurturing environment, and this was a vehicle for head teacher, Mrs Smith, and for us, to convey some of those points.

The result was that the OwsleburyPrimary School intake of the following year, 2021, saw a full complement of subscriptions to year R, for the first time. During that time they only had the Tour film available on the website, and we very much hope it made a contribution to this development. It was a pleasure to help out and to provide them these films.

If you have any further questions or feedback, or if there’s anything you feel I have missed or would be useful to add, please do let me know in the comments.
If you want to get in touch for a quote for video production, feel free to get in touch.